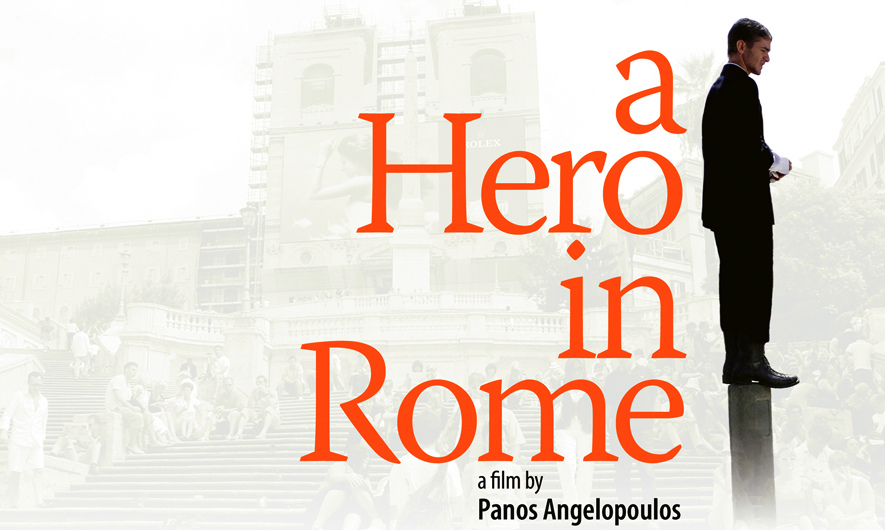 A HERO IN ROME

How did I find myself alone to enjoy the freedom that I didn’t know was my own?” Says the “hero” (Guiseppe Sulfaro, the young protagonist from the movie “Malena” with Monica Belucci).

“The movie ‘A Hero in Rome’ is a satire of Italian films of the ’70s… it is a sensible and absurd film, dramatic and comical, fantastic and real, serious and funny. It’s a movie with a lot of humour and a few doses of melancholy, ” as Director Panos Angelopoulos tells us.

The film was shot in Patra, Aigio, Rome and south Italy.

The movie “A Hero in Rome”

Is the journey of a young man who dares to make his dream come true?

A journey without borders.

A dream that is going to come true.

One moment that turns everything upside down.

The sweet experience of a trip. Search and solitude. The nostalgia of a supple age.

An extreme event stigmatizes his return to Greece.

What this trip has been for him after all?

An explosive palette of bright colours walks the audience throughout the film by TakisZervoulakos’ photographic perspective, while an almost ‘drunken aroma’ emerges through the dreamy music of IoannisAyolou, the lyrics of Nikos Moraitis and the unique interpretation by YannisKotsira and Eleni Tsaligopoulou. The soundtrack of the film is released by the record label MINOS – EMI entitled ” A Hero in Rome”.

A trip around the world…

Panos Angelopoulos’s Greek-Italian co-production travelled around the world participating in film festivals that earned him critical and significant acclaim.

As part of the Euro Cine Cite European Festival of the renowned French distributor U.G.C., the film was chosen to participate in the official opening of the Festival in Paris and Brussels.

Co-produced by the Greek Film Center and ERT.

* Reviews of the film “A Hero in Rome” at the Thessaloniki Film Festival.

“Adaptive road – movie, with a very clever, inventive prologue (featuring family scenes from supposed home – movies), starring a young man embarking on a journey to Rome to hear his idol, Pavarotti, at a concert. Only to find himself in Rome as the victim of theft and entangled in various entertaining adventures, leading him to southern Italy before finally returning to Greece. In the meantime, he will even lose his clothes, be arrested, wander around by the police, be found with a bag of drugs and at some point endangered and forced to marry.Episodes are always humorous, though sometimes I think more than necessary (exaggerated scenes with the silly hero’s sister). This is a fairly accurate Greek production (bare in mind it was shot independently), with beautiful cinematic photography (by TakisZervoulakos), with Panos Angelopoulos using history to create comic situations, capable of capturing the public. Very good in the role is the Italian Giuseppe Sulfaro, who gives an almost chaplaincy to his interpretation.”

“Another wonderful film is Panos Angelopoulos’s “A Hero in Rome”. The journey of a young man to Rome to make his dream come true, to meet his idol becomes an opportunity for a wonderful cinematic game with humour, playful mood and a little bit melancholy hidden in the background. Rome wonderfully voiced by TakisZervoulakos, the young Giuseppe Sulfaro – do you remember him as a boy in “Malena”?  – great in the role of a Greek lost in Rome. Also, Zuganelis and Paschalis Tsarouchas are good. A very good montage, but above all, a playful mood that transmits to the viewer, this is the biggest plus of this film. It makes you glad you came to the cinema.”

“Panos Angelopoulos’s film acts as a complete visual event. Personally, it reminded me of a dream. And that’s why the writing, which has a lot to do with Italian cinema, is fluidly fluid with alternating performances and a sense of qualification. Once this dream breaks and turns into a nightmare. It soon heals and returns. The hero is now deprived of illusions and walks into the great loneliness of being himself, not without the armor of his tales, but with the truth of the way of discovery.”